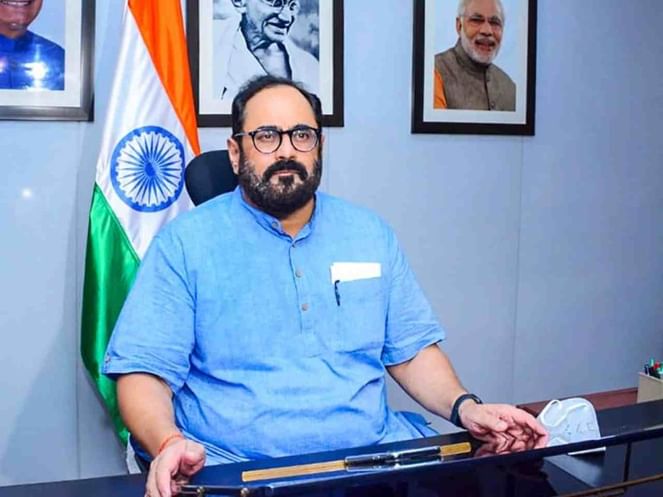 Minister of State for Electronics and IT Rajeev Chandrasekhar. (Photo credit: PTI)

According to the draft proposal, any news that has been deemed “fake” by the Press Information Bureau (PIB) fact-checking unit will have to be taken down by all platforms, including social media platforms

A draft proposal of the Ministry of Electronics and Information Technology (MeitY) has triggered a controversy in the media over the proposed power to the Union Government to take down news articles as and when deemed “fake” by its agency, the Press Information Bureau (PIB). The PIB is the Centre’s nodal agency for sharing news updates.

The Editors Guild of India (EGI) has expressed deep concern over the draft amendment. “At the outset, determination of fake news cannot be in the sole hands of the government and will result in the censorship of the press. Already multiple laws exist to deal with content that is found to be factually incorrect”, the Guild said in a statement on Wednesday.

Rule 3(1)(b)(v) of the amended version of the Information Technology (Intermediary Guidelines and Digital Media Ethics Code) Rules, 2021 states that platforms “shall make reasonable efforts to cause the user of its computer resource not to” post content that has been “identified as fake or false by the fact check unit at the Press Information Bureau of the Ministry of Information and Broadcasting or other agency authorised by the Central Government for fact-checking”.

According to the draft proposal, any news that has been deemed “fake” by the PIB’s fact-checking unit will have to be taken down by all platforms, including social media platforms. The PIB’s fact-checking unit was set up in 2019 to verify news related to the government’s ministries, departments and schemes. It routinely flags content that it believes is false or misleading. However, it rarely explains why it has flagged a specific piece of information.

The new draft, uploaded on the MeitY website on Tuesday (January 17), includes regulations for online gaming platforms. The language of the proposal also suggests that in the future, not just the PIB’s fact-checking unit but also other authorised entities could mark news items as fake.

It says that content marked as misleading by “any other agency authorised by the government for fact-checking” or “in respect of any business of the Centre” will not be allowed on online intermediaries.

Fake news is referred to as those news stories that are false or fabricated, with no verifiable facts, sources or quotes. Fake news also includes satire or parody (no intention to cause harm), misleading content, imposter content, fabricated/false/manipulated content, etc.

Under the proposal, a condition has been added to the list of due diligence criteria that intermediaries must follow in order to enjoy legal immunity from third-party content that they host.

Why is this big?

Members of civil society have expressed concern over the proposal, fearing that anything the government contradicts might be used to justify-content takedowns.

The Editors Guild of India has said this new procedure basically serves to make it easier to muzzle the free press.

“The words “in respect of any business of the Central Government” seems to give the government carte blanche to determine what is fake or not with respect to its own work. This will stifle legitimate criticism of the government and will have an adverse impact on the ability of the press to hold governments to account, which is a vital role it plays in a democracy.”

The Guild had raised its deep concerns over the IT rules when they were first introduced in March 2021 and had said they empower the Union government to “block, delete, or modify published news anywhere in the country without any judicial oversight. The fresh amendment is proposed in the same set of rules that earlier enabled a government-led Grievance Appellate Committee to have the final say about the validity of content moderation decisions taken by all intermediaries.”

The Guild also said that multiple laws exist to deal with content that is found to be factually incorrect. The Information Technology (IT) Act, 2008. The offence related to electronic communication shall be punished under section 66 D of the IT Act.

The Disaster Management Act, 2005. Whoever makes/circulates a false alarm/warning as to disaster/its severity/magnitude, leading to panic shall be punished under the DM Act.

The PIB’s fact-checking unit has itself been accused of tweeting inaccurate information in the past.

In May 2020, the website Newslaundary highlighted several instances as to how PIB fact-checks were actually denials of media reports critical of the government – especially its COVID-19 strategy.

On June 2, 2020, the PIB’s FCU denied the presence of Chinese troops on the Indian side of LAC. Two months later, a defence ministry document stated that the Chinese side had transgressed into Indian Territory in May 2020.

The PIB unit also declared a report as “fake news” about the Uttar Pradesh Special Task Force having directed its personnel and their family members to delete 52 Chinese apps from their mobiles for security reasons. However, it turned out the news was correct and was confirmed by STF IG Amitabh Yash. Within 10 days, the Central government banned 59 Chinese apps for similar reasons.

The International Fact Checking Network requires fact-checkers to have “a commitment to non-partisanship and fairness” so that they do not “unduly concentrate” on one side. The PIB’s FCU does not have such a process. It only says whether something is true or false without providing context.