The situation traces back to late 2019, when Chicago-based First Midwest Bank started talking with Backbase about replacing First Midwest’s decades-old systems with enterprise resource planning, or ERP, software. The installation, which was to have been completed by July 2021, remained unfinished when Old National and First Midwest merged early last year.

Now that Old National has inherited the problem—and after First Midwest paid $7.5 million to Backbase and “millions more” to other vendors related to the project, the lawsuit alleges—Old National says it wants to get out of the contract and recover the money paid to Backbase.

The all-stock merger, a $6.5 billion deal, closed in February 2022. The combined bank now operates as Old National and currently has $46 billion in assets, making it the sixth-largest Midwest-based bank in terms of assets.

Backbase specializes in serving banks and credit unions. Its website describes the Backbase software platform, which it calls its Engagement Banking Platform, as a “unified engagement layer” that can connect with a bank’s other systems.

“Backbase helps retail banks re-architect their banking services around their customers with one powerful platform that covers the full customer lifecycle, from acquisition to retention,” the website says.

“By working with us, you’ll empower your employees and customers with fully seamless—and truly exceptional—user journeys,” Backbase says on its website.

Old National’s complaint, however, paints quite a different picture.

The complaint says Backbase’s software did not have the promised out-of-the-box functionality, and that Backbase’s initial attempt at software implementation was an “unmitigated failure” that failed to deliver at least 161 of First Midwest’s requirements. Even after First Midwest dramatically scaled back its requirements for the project, Backbase could not deliver, the suit alleges.

Allegations in a lawsuit, of course, are the opinion of the plaintiff. Backbase’s deadline to file a response was Jan. 6. As of Wednesday morning, a response had not yet been posted on the public docket.

Backbase declined to comment on Old National’s allegations, instead sending an emailed statement to IBJ that did not address the plaintiff’s claims.

“Simply put, Backbase is successful when our clients are successful,” the statement said. “We are and have always been committed to helping our clients serve their customers better. However, we will not comment on ongoing legal matters.” 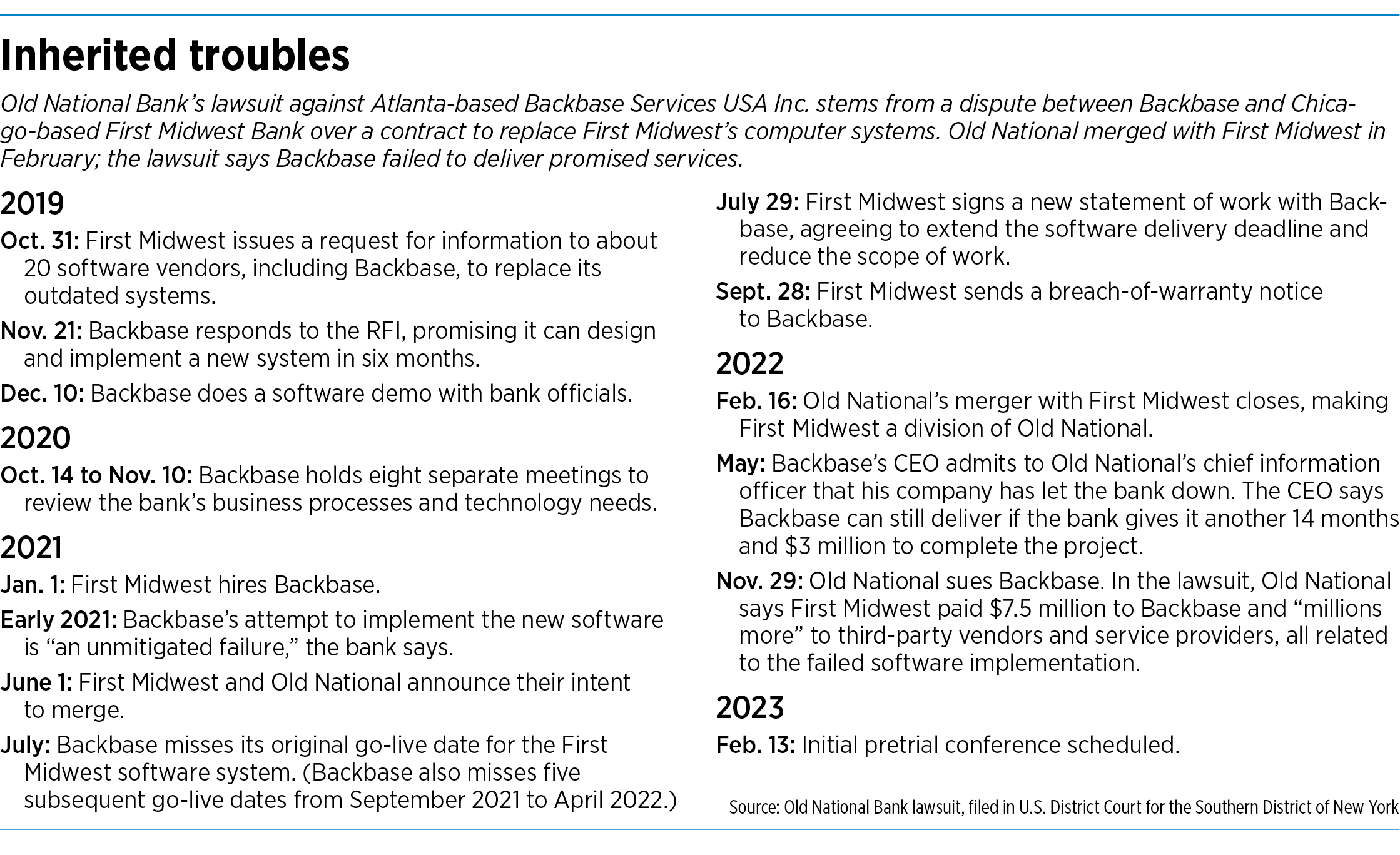 Old National also alleges that the software failed to meet federal banking regulatory requirements. As one example, the suit alleges, the software could not properly display interest rate and annual percentage yield information to customers who were using the software’s digital sales tool to open a certificate of deposit.

In its complaint, Old National makes allegations containing colorful details. It describes a Dec. 10, 2019, meeting where Backbase officials demonstrated their software to First Midwest officials. The complaint claims that a Backbase vice president stated that “‘everything you are going to see is real software on real servers bringing it to [the] real world. It’s all real. There are no mock-ups here.’”

The complaint says “this was not true. The demonstration was a high-tech parlor trick with Backbase largely demonstrating vaporware,” which is a computer industry term for software or hardware that is announced but not yet introduced to the market.

The suit also alleges that Backbase was unfamiliar with basic banking-industry concepts such as health savings accounts, or HSAs.

“In order to get Backbase to provide a software solution that would allow First Midwest to offer HSAs to its customers,” the complaint says, “First Midwest was forced to draft a 5-page synopsis on how HSAs worked to Backbase to educate Backbase on the fundamentals of the account.

“Even with First Midwest’s continual efforts to educate Backbase so that it could deliver a workable software solution, Backbase still failed to deliver anything close to that,” the suit says.

Representatives from First Midwest and Backbase met eight times in October and November 2020 to talk about project requirements, the lawsuit says. On Jan. 1, 2021, First Midwest officially hired Backbase for the project. Backbase said it would have the new software system able to “substantially perform” as required within six months, the suit says.

But Backbase missed that deadline, the suit says, along with five more from September 2021 to April 2022.

Along the way, Old National alleges, Backbase claimed that the project was on track, “thereby hiding the true status of the project from First Midwest, and intentionally depriving it of the opportunity to decide whether it wanted to devote more resources to the project, pause the project or terminate the project.”

First Midwest sent Backbase a breach-of-warranty notice in late September 2021, the suit says, but Backbase refused to honor its warranty obligations. The bank decided to continue to work with Backbase in hopes of getting “a minimally viable product,” the suit says.

‘On board,’ at first

In June 2021, Old National and First Midwest announced their planned merger. Old National “was without question on board with continuing the relationship with Backbase,” the bank says in its complaint, because it was excited about the prospect of being able to use the new Backbase software after the merger closed.

In response to an IBJ query, Old National said via email that it had been “genuinely excited about the opportunity to partner with Backbase … . Enthusiasm continued through the merger and we were all very much looking forward to working with Backbase as a combined organization. Unfortunately, time and time again, Backbase failed to meet expectations and deliver on their obligations.”

The suit alleges that, after a meeting between Old National and Backbase in May 2022, Backbase said it would need another $3 million and 14 months to complete the software project. After this meeting, Old National said in its complaint, the bank decided that “the only real solution was to part ways because of Backbase’s repeated failures, misrepresentations and breaches.”

According to Old National’s complaint, First Midwest had started its search for a new software system by hiring a consultant. The consulting firm helped First Midwest come up with its software requirements, then issued a request for information to about 20 software vendors. First Midwest narrowed that list to four potential vendors, including Backbase, then chose Backbase after its December 2019 software demo.

These steps are standard protocol for a company looking to replace its software systems, said Bill Baumann, who directs the expert witness practice for Denver-based Panorama Consulting Solutions.

But assuming Old National’s allegation is accurate, Baumann said, the promise of completing a software implementation in six months should have been a “red flag” for First Midwest.

A more realistic time frame for a project like this, he said, would have been 18 to 24 months. “Six months would be incredibly aggressive,” he said.

Panorama has provided expert witness services in hundreds of cases that involved failed software system implementations, but the firm is not involved in the Old National/Backbase dispute.

An initial pretrial conference in the case is set for Feb. 13.•